All Collections
Fantasy Football
FAQ
Do you support auction drafts?

Do you support auction drafts?

Learn how you can use auction for your league

We have added a long-awaited feature that we believe our users will absolutely love. Take your league to the next level with auction drafts.

Now, you can conduct an auction draft in any type of league on Sleeper -- redraft, keeper, and dynasty. You can also run as many supplemental drafts as you'd like as auction.

These drafts grant the commissioner the ability to set individual team budgets for the draft, so your league can determine any penalties or keeper costs.

Arguably the most fun part of any fantasy football league is the draft. Spending time with your league mates and selecting your favorite players is an integral piece of your fantasy experience as it shapes your team for that season, and possibly beyond.

Now, you can take your league's draft even further.

We are ecstatic to have made auction drafts available on Sleeper!

Instead of a linear or snake format where players take turns selecting players, an auction draft allows users to jump in and try to claim the guys they want at any time. This creates a very intense and strategic atmosphere among your league mates.

The commissioner will award all league mates a set amount of funds to use in the draft. They can choose to set this to $100, $500, or any other custom amount.

The commish can also choose to award specific amounts to each individual team in the league's draft settings:

To begin the draft, a nomination order will be put in place. The first user will nominate any player they'd like, which then opens up the bidding process. 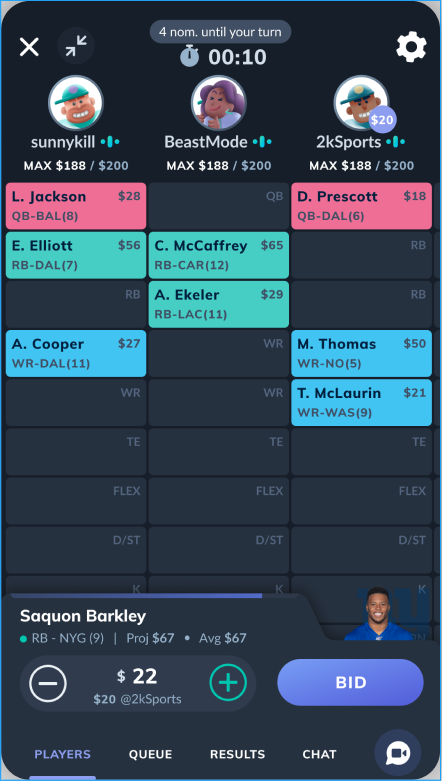 You'll be able to see the bid history, and you'll have the option to increase your bid until that timer runs out. The user with the highest bid when the timer hits 00:00 gets the player.

As shown in the screenshot above, you'll be able to see information such as projected and average bid amounts, how many nominations until your turn, how much money your league mates have remaining, and much more.

In your league's draft settings, the commissioner has the option to adjust these options.

The options for both durations are:

These options allow you to have a slow draft that spans over the course of hours, days, or even weeks. 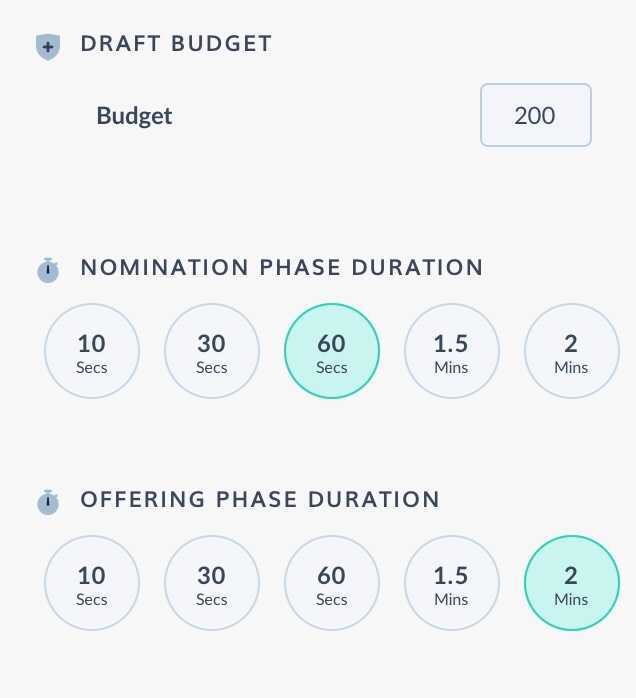 Your budget and amounts do not carry over into your league's season. Once the draft is complete, those amounts no longer matter and are not enforced in any way. The only way you'll be able to see them again is by viewing the draft results.

Do you want to spend big on a couple of elite players, or would you rather spread the wealth and try to create a more balanced team? Budgeting wisely will be key as you'll want to ensure that you have enough throughout the draft to get the players you want.

We highly recommend using auction, and we encourage you to try it out in some mock drafts before your league begins.

Can I bid on more players once my draftboard is filled?

No. Once your team column on your draftboard is filled, you cannot bid or nominate, even if your actual roster is still under the limit.

Can we have it so there are multiple nominations at once?

At this time, no. This is a feature that we hope to release in the future.

Will there be a salary cap option for fantasy leagues?

This is something we may build in the future, but we don't have any immediate plans for it at this time.

If you have any other questions about auction drafts or would like to submit any feedback, please contact our team at [email protected].