⚔️ How to Add or Drop Players

Learn how to swap players and why it could be beneficial

In any type of fantasy league, teams often change players throughout the course of a season.

You will draft your five players, but your team may not consist of those same five players by the end of the split.

Why would I want to Add or Drop a Player?

In a lot of cases, some of your draft selections will turn out to be great choices. They'll earn a ton of points for your team each week. But you also may find that some of your drafted players aren't doing as well as you had hoped, or are bringing the rest of your team down due to a low point total.

When that happens, it may be time to consider finding an upgrade, especially if you have a poor record. If you are 0-3 and haven't won a matchup in your league, you would be more inclined to see if there are any better players.

Typically, the worst player owned or the player with the least team utility, is dropped. In some rarer instances, players become ill or injured and can be a reason for abandonment. This means that there is a need to find a new player to add to your team.

You can always view the available players in your league by swiping right or pressing the player icon in the top right corner of your league.

This will show you all players that you can add, and you can sort by their role. 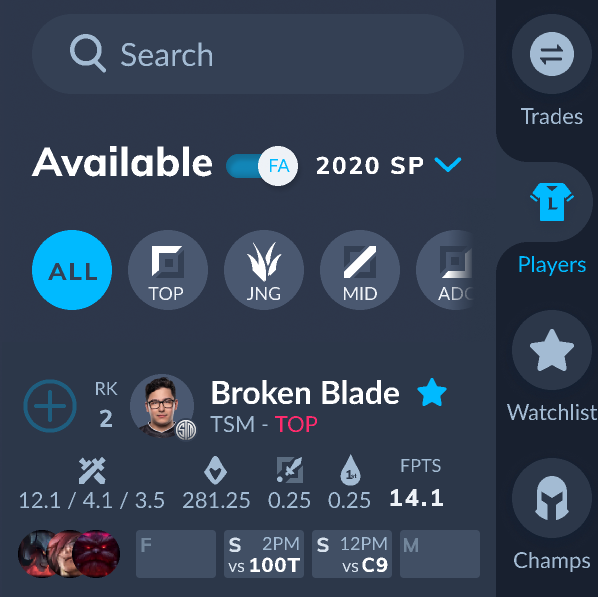 You can even press on the player to view all kinds of details such as their ranking, a game-by-game log of their point totals and statistics, which champions they're playing with, and much more:

This allows you to research any player in your league and it serves as a great way to scout those who you want. A lot of fantasy owners really enjoy this part of fantasy because it's a great way to discover some underrated players that you can add and surprise people with. And if that player performs well after you add them, it makes you look like a genius!

It could always backfire as well. See, since you can only have 5 players on your roster, you can try to add a player, but you will have to make sure you have room. If you already have 5 players, you will need to drop somebody.

Let's say one of the players on your team is Broken Blade, and he has been struggling lately. He has not been performing well and is part of the reason you're losing more weeks than not.

You can view the available players in your league. In this example, let's pretend that Licorice is available.

Licorice has been playing much better and has more points than Broken Blade. You can make the decision to swap those players: 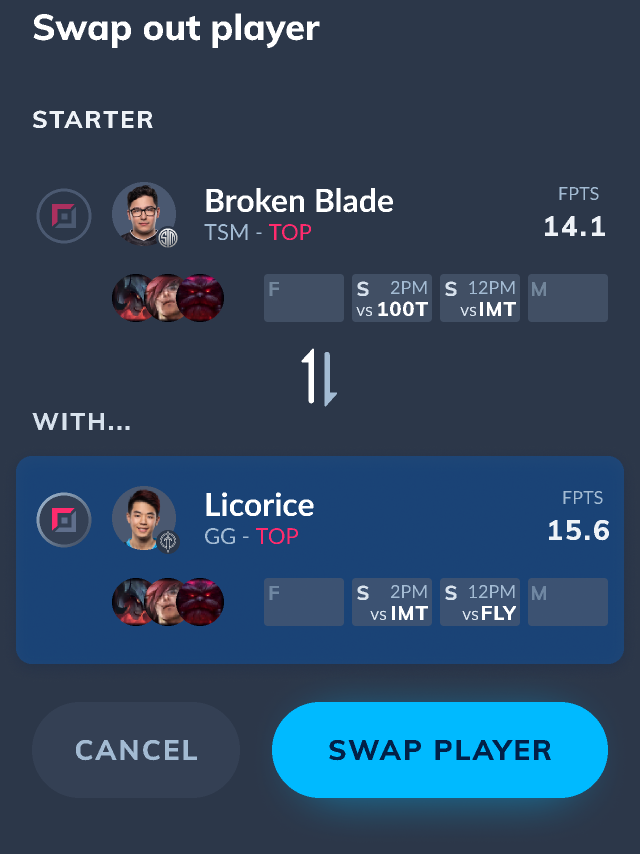 It's important to keep an eye on the available players because they can be added as potential upgrades for your team. But it's equally as important to consider which player you're dropping as they can help your opponents.

By default, your league has something called waivers and free agency periods. These are periods of time when players can be added instantly or player can be claimed, but not added until a certain time.

You can learn more about waivers and free agency here.